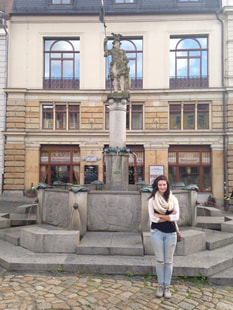 Bethany catches the travel bug
1. Bethany's 2013 Echo Project - The Flashlight that Saved My Great-Grandfather's Life: a story of a Canadian merchant mariner in the Battle of the Atlantic (World War II).

Teacher's Summary: Bethany asked around about family stories and was told she had a great-uncle from New Brunswick who kept records and artifacts for the family. She heard that there was something important about a flashlight. Bethany had never heard of or met her great-uncle Michael Burchill, but she got up the nerve to begin a series of phone calls and emails in order to learn about an emerging story. Her great-grandfather Howard Burchill (the great-uncle Michael's father) served on a merchant marine cargo ship The Liverpool Packet in the early 1940s, part of a small convoy a few miles off the coast of Canada. Bringing supplies to Britain was the merchant marines' contribution to the war effort. The ship, on its way to Newfoundland to drop off provisions for the war, was attacked by a German U-Boat. As Burchill's ship lost its lighting and began to sink, he knew he had very little time to get out. He found a flashlight and was able to guide himself and others onto the surface and into lifeboats. The German U-Boat surfaced and came alongside the lifeboat to check on the survivors. The U-Boat captain emerged and spoke enough English to converse with the surviving captain of the Liverpool Packet, whereas his standing orders would have surely been to finish off the survivors. Perhaps he thought that sinking their ship was enough. He waved them off towards shore, perhaps after giving tghem some supplies to survive the long row to shore, and took his U-Boat back under the waters of the North Atlantic. Burchill survived the war and returned to home to start a family.

Initially, Bethany learned this story from her interviews while completing the project, and indeed has continued her heritage inquiry even after the course was over.  Since graduation, she has continued to put together the family's puzzle pieces. Bethany has learned about specific connections in her family to homesteading in Upper Canada in the 1820s, a possible link to the family of Napoleon Bonaparte, and that she is a direct descendent of John Livingston, brother to the African explorer David Livingston. She also learned about her great-grandfather Burchill and his family's attempt after WWII to identify and contact the German U-Boat captain in order to thank him for sparing his life. Their research established that the German captain was none other than Heinz-Otto Schultze, recipient of the Knight's Cross of the Iron Cross. Schultze had died in later the war, and left no family behind, or at least none that would receive correspondence from Canada.

More than just filling in the family tree, the Echo Project has been a means for Bethany to develop her love of history and learn in depth about subjects that we only glance upon in high school. Bethany's work in Social Studies also sparked a desire to visit places in the UK and Ireland where her ancestors lived, which she was able to do upon graduation.
2016 Update: Bethany did indeed follow up on her great-uncle Michael Burchill's offer, and visited family in Nov Scotia in 2014. These folks were unknown to her prior to her Echo Project research. She got a chance to hear more about the story of the Liverpool Packet.  This renewed interest and connection with the story coincided with a motivation for uncle Michael to gather his research for a series of interviews with CBC leading up to a documentary about the Liverpool Packet on the CBC series Land and Sea. Highlight of Bethany's visit: she got to see the flashlight that saved her great-grandfather's life, and it still worked! 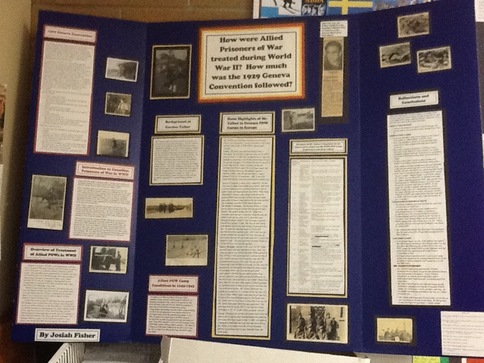 Teacher's Summary: Josiah shared the Echo Project with his family and asked them to help him identify potential topics and interview subjects. They introduced him to a family acquaintance and close friend of Josiah's grandfather. This was Gordon Talbot, a 90-something WWII British soldier who had been captured three times by the Germans and escaped twice from POW camps. He now lives in Prince George, BC. Over a few evenings, Josiah interviewed Talbot and viewed his photographs and records of WWII. Talbot was able to keep and use a camera throughout most of the war, and took photos that showed the impact on people and the devastation to rural and urban landscapes in Europe.

Josiah obtained permission to share these records, including some difficult images of civilians who had been killed and left on the side of the road. Josiah's display took the form of large posterboard that contained interview questions and answers, timelines, images and news clips, and a response to his essential question about the treatment of POWs. Of particular interest to Josiah was Talbot's testimony against Kurt Meyer, an infamous Nazi SS Officer who was tried as a war criminal for killing Canadian prisoners and served his sentence in Canada after his conviction. Meyer would only spend 10 years in prison and eventually returned to Germany. As a result of the interview and follow-up inquiry, Josiah became well-versed in the Geneva Convention. The main benefit to this Echo Project was simply to connect a young mind with living memories of a terrible event in human history. Our class benefited by having a sophisticated case study by which to understand the international connections of WWII and help develop historical empathy. Josiah made it a personal challenge to incorporate each of the six historical thinking elements described in the project guideline (one or two would have been fine!).

As is so often the case with elderly interview subjects, Talbot was delighted to share his stories with a younger generation, difficult and full of sorrow as they were, and in return Josiah has a new-found respect for the sacrifices and cost of war, and a sense that our community is filled with people that have powerful stories to tell. The conversations between Josiah and Talbot have continued beyond the project, and had some unexpected impacts. The loca Prince George Citizen newspaper, having head about this project, followed up with Gordon Talbot for a fresh interview and story. Between Josiah's project and the Citizen article, Gordon's daughter Karen was grateful and amazed -- she had not heard her father's full story until now in her 60s. Sometimes all that is needed is for someone to ask a thoughtful question at the right time, sometimes just in time.  Our Social Studies 11 class was so glad that Josiah took this initiative -- the Echo was profound.

Here are some Echo Project posters that have anchored class presentations and displayed results of interview questions. 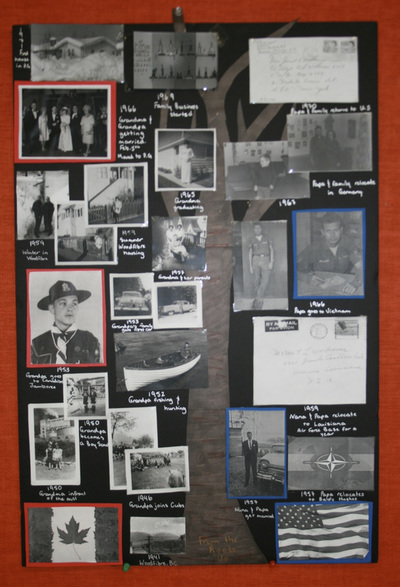 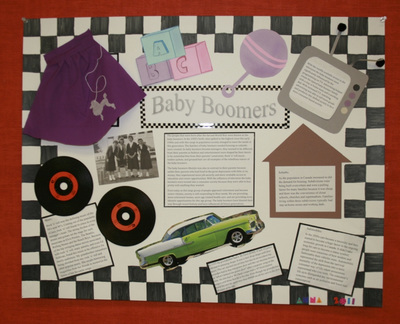 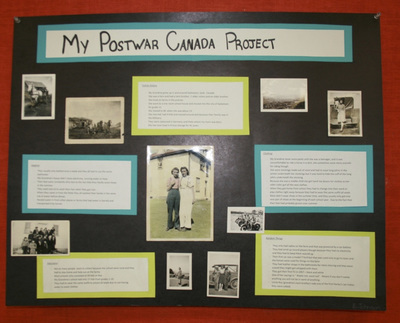 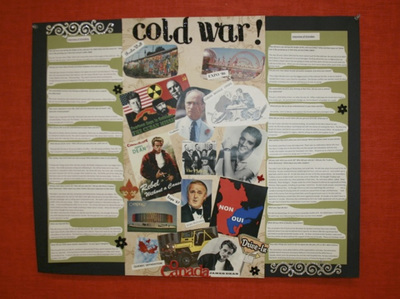 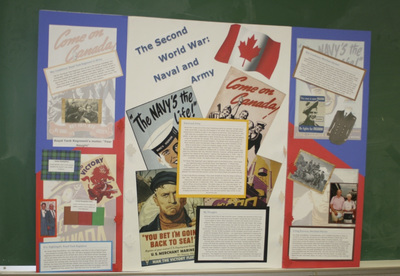 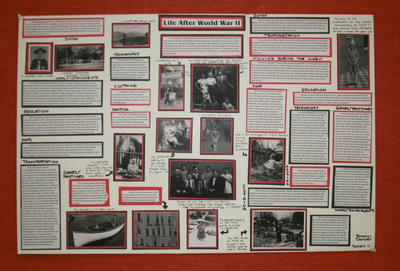 Jon interviewed his grandparents about life and work on a family farm in the 1950s, and how agriculture and technology have changed since then.  He also heard stories of his great-grandfather Rasmussen, including two instances of "aviation" that stood out for him: seeing, at age 4 in 1918, his first airplane flying overhead, and then in 1969 noting space travel and the moon landing. Jon's grandmother, a nurse, also provided a then-and-now perspective for this project.

Megan interviewed her 84-yr-old grandmother about her recollections of World War Two and the aftermath.  Here is a short excerpt from Megan's Echo Project: "My Grandma was eight at the time of WW2. She grew up in a small town just outside of Toronto; her family of twelve lived on a farm and was fairly well off. Her two brothers who were of age didn't have to go to war because they were flat footed and claimed to have bad hearts. Her mother was of Mennonite religions and didn't believe in war so she tried not to get involved as far as possible. This angered many of the people in her community whose sons had to go. My Grandma was teased a lot in school for this - many of her friends' brothers had to go - so this caused some tension because she couldn't relate to the other kids. She believed that the cause was good and would have gone instead if she could have. She often visited the family and friends of the soldiers in her spare time."

Brandon wrote a richly detailed journal from the perspective of his Great-Grandfather, who emigrated from Guangdong, China in 1912. He conducted his research by blending personal (family) records and stories with public (web-based) sources. The journal recreates the voyage to Canada, the Head Tax process, and the arduous process of setting up a new life in Canada. In his project epilogue, Brandon describes the value of heritage to his family, and makes connections to other similar stories experiences by Chinese-Canadians.  The final page of his submission contained a copy of his great-grandfather's head-tax from.
Back to Echo Project page.